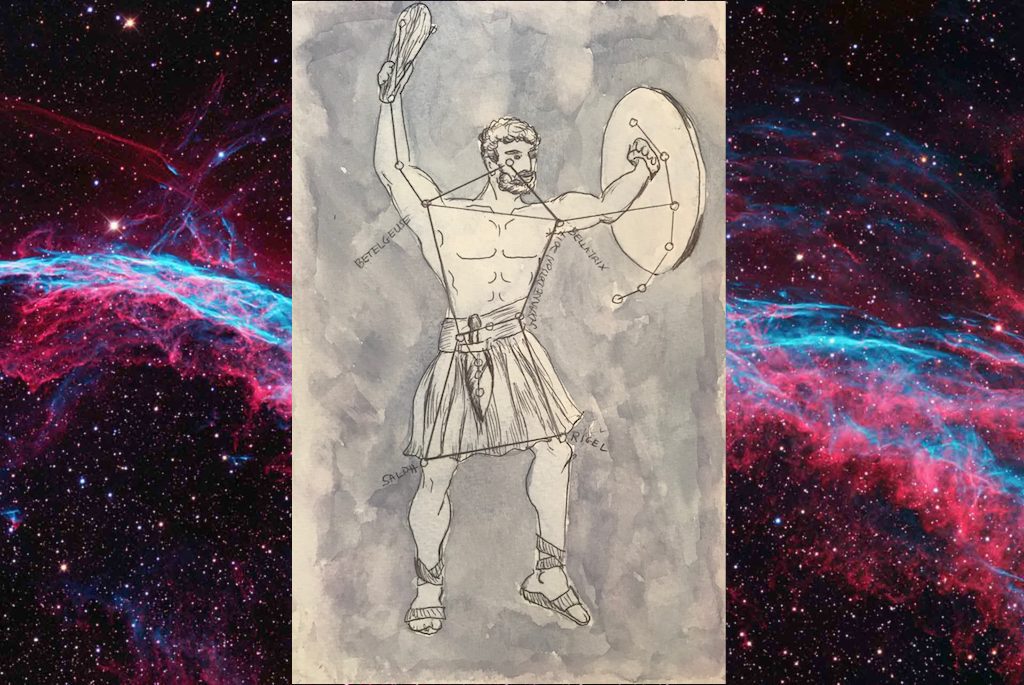 At last we arrive at October, the splendid month. For those of us in the Northern Hemisphere, we glide along properly into autumn. The afternoons glow with amber light. The leaves begin to fall. The sea grows moody. We crave warm cups of cider. We don cozy socks. We begin to see the telltale signs of Halloween’s approach, with porches filling up with cheerful pumpkins, soon to be carved into ghoulish or funny shapes for Jack-o-lanterns.

What I most look forward to, however, is looking up at night! The night sky wheels above as the days grow short. We can see star patterns–constellations–changing as we hurtle towards winter. Cassiopeia, with her elegant “W” shape, reigns bright. Corona Borealis crowns the October night sky. The winged horse of mythology, Pegasus, rides above. And then we finally see my most favorite constellation, Orion.

Orion, the Great Hunter of Greek myth, holds his shield aloft with one arm, and his club with another. He wears a sparkling belt, from which his sword hangs. Close by, his trusted hunting dogs accompany him in the forms of the constellations Canis Major (the Big Dog) and Canis Minor (the Little Dog). Together, Orion and his hounds will march across the sky through winter. October heralds their quest.

In the constellation Orion, his right shoulder shines from the star Betelgeuse (a red giant), and his left shoulder with Bellatrix. His belt is made of three bright stars in a row: Alnitak, Alnilam, and Mintaka. Orion’s sword contains stars and the fabulous Orion Nebula. Brilliant Rigel and Salph also make up his form.

One very fun thing you can do while gazing at Orion: follow the line of his belt of stars in either direction. To the southeast, you will see the incredibly bright star, Sirius, part of Canis Major. To the northwest, you will see the star Aldebaran.

The sight of Orion fascinates and rewards the autumn stargazer. I hope you will take a moment this fall and winter to look up, and wave at the warrior above.