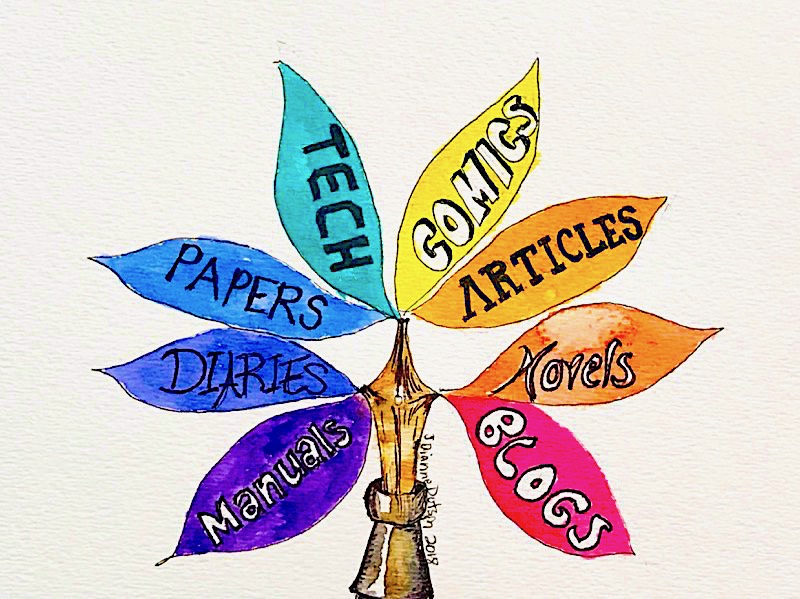 Recently, a teacher at our children’s school asked if I would be interested in speaking to her third grade class about what it means to be a writer. I agreed, excited to give the kids a chance to hear about the writing process. The teacher clarified that the class had been learning about editing, and how important that was to writing. So I came up with some topics to discuss.

The children greeted me a little quizzically. Even though I already knew them, I had not spoken to them much as a group before. I told them first that I had begun writing and drawing concurrently, from a young age. I would write stories and illustrate them as I went. I told them that I carried this forward into high school, and both skills helped me as a student. In fact, I assured them, they would need to be strong writers in order to apply for college and any potential scholarships. In my case, I applied for two art scholarships, and won them, not only based upon my artwork, but by my writing skills.

In college, I shared how I eventually decided to move into science rather than art. I used my writing skills in many class papers, and tried to strengthen them to stand out and make better grades. I wanted to be a better writer, while at the same time I learned about scientific research. I made clear to these kids that, no matter what field they choose to go into, being a strong writer will always help them. They need to be able to communicate well, to make whatever case they strive for.

I switched over to the importance of editing. I knew they had just covered this in their language studies, and had begun editing each other’s writing. I told them how one should first self-edit, and then hand the work off to someone else to review. It is essential to do this, because we writers glaze over our own errors, and editors are needed to clean up the writing and make it stronger.

After this, I switched to talking about writing fiction, specifically novel writing. This really piqued their interest, and already they had been fully engaged and attentive. I talked again about how, when one writes a novel, one must give it to an editor. I spoke about the professional editors I had hired to review my current science fiction manuscript. The first editor, really the main editor, had gone through the entire printed manuscript and put her notes in the margins. I explained that I had double-spaced the text to give her room to do this, and this is standard procedure for writing a manuscript. I had brought mine along, and showed them on a projector some of the edits made. I then described how a copy editor had gone through my corrected manuscript and polished the text as well, removing any strange quotation errors and the like. At this point I made clear that I greatly enjoyed the edits, because I knew they would make my novel the best it could be. And that is the job of a good editor. My point was, do not be upset by editors. Editors improve our writing!

The children grew intrigued, and several hands leapt into the air to ask questions. Some wanted me to read the book, and I said I would read an excerpt from the first page after I had finished. They were like popcorn popping, talking in excited voices, wanting to learn more.

I moved on to the literary agent process. I explained to them that while this was time consuming, it was a valuable exercise. Not every novel will get traditionally published, but I wanted to attempt to gain an agent to help make this happen. I told them that I had received many, many rejections, and some near hits and near misses, and that I was still undergoing the query process, with a full manuscript review, etc. I also discussed independent publishing, and self-publishing, to be more specific. I stated that I planned to self-publish this particular series if I did not gain an agent. But I also had other works that I would begin querying for as well. One child asked the excellent question, “What happens if an agent doesn’t want all of your books in a series?” and this was relevant to my current process as well. I told her that you have to make sure your novel can stand on its own, as any potential sequels may never happen.

One thing I also emphasized was the fact that any writing is writing. Writing comic books, diary entries, blogs, articles, manuals, technical writing, papers for school, novels…all of these are different modes of writing, and none is more important than the other in terms of what to pursue.

After my talk, many of the kids asked great questions, and two even came up to me to show me their wonderful comic books they had made. I felt incandescent, knowing they had listened well and asked such thoughtful questions.

There is no better feeling in the world than knowing you’ve perhaps passed a torch to young minds, so they can grow and become strong writers themselves.