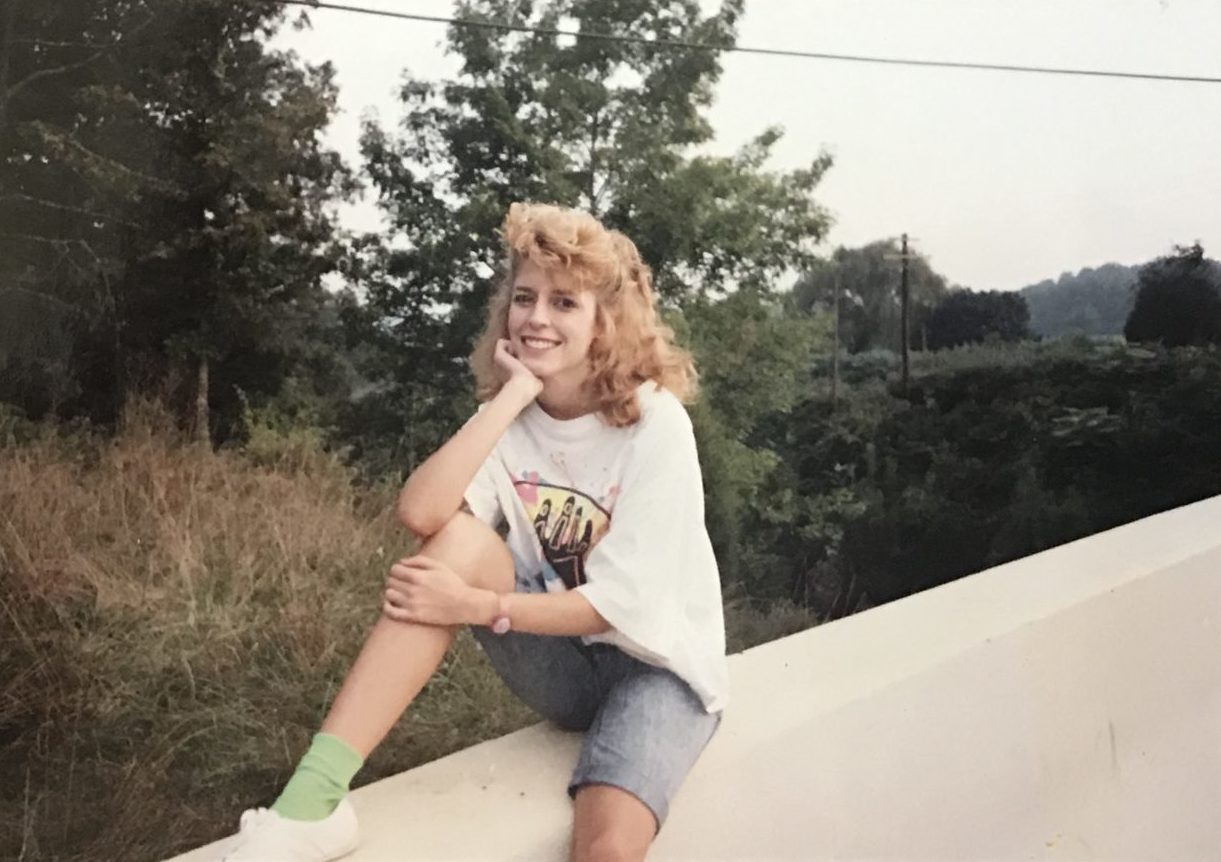 I shared the pic above on social media. And I wondered why I chose that one for #ThrowbackThursday. I got to thinking about it, and then realized. It caught me just before…before everything changed for me.

It’s the summer of 1989. I’m 15 years old. I’m sitting on the bridge that stretched high above the railroad track close to my house in Gray, Tennessee. The trees are still pretty lush, but you can tell it’s late summer; there are dried grasses.

I’ve got big Sun-In hair, Day-Glo green socks, a Body Glove shirt, and a plastic knockoff watch that resembles a Swatch (never could afford one). Rolled up denim shorts. A tan. I’m about to watch the sunset, my ritual. Sitting on the bridge and watching the sun go down.

I would lie back on that concrete railing and let my arms and legs fall on either side. And I would just look up and up into the sky, as it turned that elusive twilight blue after the sun faded. I would feel weightless, limitless.

This was the summer in which I started a pen pal relationship with a guy in the Navy. He was about to go off to Central America. He was 21, I was 15…so it would never have worked, had it become anything; I was too young then. And it turned out he was involved with someone (I didn’t know it then). But getting his letters in the mail made my entire week. Sometimes we would even talk on the phone, before we ever met. Before he left on his mission he asked, “Would you think about me while I’m gone?” and of course I would. I was excited, a nerdy, awkward teen getting letters in the mail from this cute Navy guy. For once I felt NOTICED, paid attention to.

I used to walk my dog Thumper everywhere. He was my constant companion. He was a long-haired, black-and-tan dachshund, and he was my best friend. He was MY dog. Sometimes I would wake up around 3 AM in the morning, get his leash, and we’d go and sit out in the back yard in the dewy grass and just wait for the sun to come up. My buddy. I felt right with him around. I was safe, he was safe; as long as we were together, everything would be okay.

A few months after this pic was taken, school began. My school friend Shawn told me there were Russians in town! The Cold War had JUST ended, and apparently there were two Russian guys, exchange students, who were visiting. We could go and meet them! I was all for it. Russians! Wow! I never thought I would see the day when I would actually meet one, much less two, in East Tennessee, of all places.

The day came, and school was out, and I couldn’t find Thumper. Now, once in a while he’d free-range like that and go off roaming. But he would always come back. I looked all over the place for him. Called for him. Nothing. I went down the railroad tracks, but I only went one way.

Why I didn’t go the other direction, I will never know.

My Dad got home from work later, and he went looking for Thumper too. After some time, I heard a strange sound, and went to my bedroom window. Dad was pushing a wheelbarrow covered with something. And I knew. I knew Thumper was gone.

Dad had gone down the railroad track. He went the direction that I, for some reason, hadn’t gone.

The sound of that shovel hitting the earth as Dad dug a hole under the grapevine.

My soul torn to shreds.

And the doorbell rang.

I’d forgotten all about the Russians. He’s staring at me from my doorway, eyes huge, and I’m destroyed. My dog is dead. My best friend is gone.

But if Shawn hadn’t been there, it would have been so much worse.

He took me anyway. Took me for a drive. I don’t remember where we went. Everywhere. All over those hills and valleys. Until I could breathe again.

And I sat in the car in a daze. Finally I pulled myself together long enough. I insisted we go meet the Russians. I’d made it that far. Why not? I didn’t really care anymore. I did it for Shawn, as much as anything.

I don’t remember much about them. I couldn’t tell you their names. I don’t remember if Shawn told them what happened to me. I was in shock. They were nice enough. Okay, I met Russians.That’s about all my brain could register.

I don’t even remember the drive home. I know Shawn was so kind, and so sympathetic. But that drive is in the nether regions of my mind, buried.

Going to bed was terrible. Waking up was worse, all of it hitting me again. Then the dreams. The dreams in which Thumper was still there. In which I had got to him in time. Sometimes I still have them. Thirty years later.

So that picture you see above. That’s before.

Before Thumper was killed. Before my feelings for the Navy guy blossomed. That’s when I was still a child. And after Thumper died, that ended. My childhood was over.

A long period of time would pass in which I could not write much, other than letters to my pen pal. I would meet him in 1990 during the Ides of March. And I would learn only then that he was engaged. And I would afterward take his letters and destroy them on the very same train track where my dog was killed.

I was so hurt and confused.

And then I would move to another school, and things got worse from there. It kick-started a difficult decade for me, and the unhappiness lingered a few years after that decade ended.

But I wouldn’t go back. You can’t wish your life away. Time travel would be a terrible power to have. Some of the truly wonderful things in my life would not exist if I could change steps along the way.

I keep saying it, because I know it to be true, it is best to go forward and never back.

Maybe I would, at least, tell that girl to wear sunscreen, and not continue the tanning. Or maybe I would just watch, and let her figure everything out. Because I would know she made it to after.