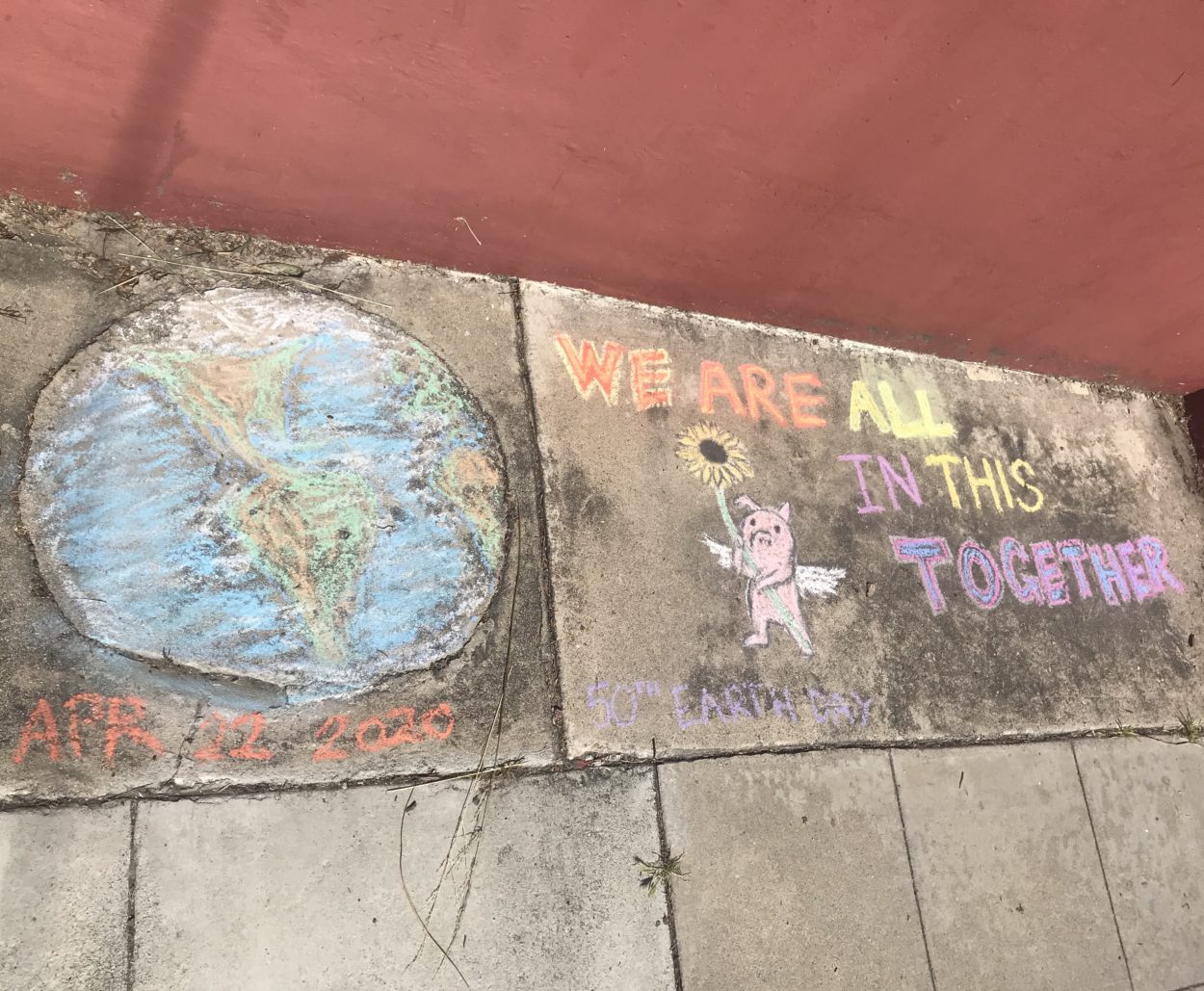 Long post ahoy, full of many musings, and how I’m processing everything right now.

I started painting watercolor cards for people this week, because I didn’t know what else to do. It was just the right thing to do.

My writing is like my car, currently. Protesting at being forced to be “on”. And I have to turn the key and get the car on the highway every four days (give or take) so the battery won’t lose charge. There’s a metaphor, and it’s that I have to keep writing. Whether I feel like it or not.

I keep having flashbacks of past road trips. The cross-country ones, where we go to visit our relatives in Tennessee and Virginia. Marking the long, long miles with the various landmarks. Oh, there’s the New Mexico border! Oh, there’s the tilted water tower and Cadillac Ranch! Hey, there’s that big lake in Arkansas! Or the victorious shouting when we’d cross the Mississippi River into Tennessee. Or, closer to our home here in SoCal, the times we’d venture up to Laguna Beach and gawk at the turquoise water.

Once Upon a Time on the Pacific Coast

Sometimes I get flashes from much older trips. The time I took a solo trip on the Pacific Coast Highway, with the intent of traveling from Seattle, where I lived at the time, to San Francisco (where I would eventually move for a half a year). I never made it there. I had stayed in bed and breakfasts each night, and ate way too much in the car and out of it. (Embarrassingly, I also voice recorded part of the trip.)

One night I pulled into Eureka, California, as the rain beat down steadily without stopping. I ate at the fanciest restaurant in that town, because I was on vacation and I had saved up. I ended up chatting with an entire motorcycle contingent that had booked the place as well, and this was a touring group who made annual trips around the U.S. A pleasant bunch of folks. I spent hours there, for it was a several course meal (my first). My waiter was quite charming, and for a little while after that, we emailed each other.

When I made my way to the B&B in Eureka, it felt like a fairy tale, for I was the only guest there, and they had a place setting for me alone. And nobody showed up but one innkeeper. The other was off in the kitchen, or so the man told me. To this day I’m not entirely sure. I suspect he had a magical assistant who prepared the food and who was invisible. For I never saw the other person. That night, I burrowed down into an antique bed and listened to the rain. I woke up, went downstairs to breakfast, and a huge spread had been placed on the table for me alone. Magic, surely.

After that, I went on my way, with the goal of reaching Mendocino by nightfall. But I never made it there. A landslide just to the south blocked all of Highway 1. So I had to turn around and drive back in the constant rain to Highway 299, to head east and reach Interstate 5. And then I was stuck between two semi trucks on winding mountain roads. By the time I made it to Interstate 5, I had broken out in hives from stress and exhaustion. I decided it was time to head home, and I would visit SF another time. I tried again the next year to visit Mendocino, and again that was thwarted.

What I’m getting at is, nearly twenty years later, I still haven’t made it to Mendocino. I wanted to go in 2018 for a personal writing retreat, or in 2019…and it didn’t happen. It’s my white whale, as far as destinations go. I’ve been thinking about it a great deal, because right now the thought of being in a small coastal town with a wild seascape and general emptiness seems very appealing. Certainly more than the bizarre prevalence of leaf blowers in a pandemic, or hearing several surrounding neighbors have too many people over. (Some things never change.)

More and more, I want to look outside and see wilderness. Or at least an endless horizon. Will I ever make it to Mendocino? If I do, I’m going straight to the bookstores there, before I do anything else. And then, afterward, I’m going to stare at the immutable yet ever-changing sea.

Plans Made and Unmade

We were going to go East this summer. Many things have shifted, beyond the most obvious situation. Family members ill, family members relocated, everyone unsure about logistics, about the long term. We wanted to see everyone so badly. It has been two years since I’ve seen my parents. It hurts to think that I could put them at risk just by seeing them. I talk to them at least once a week, and that helps. They’re excited about the new book. I’m going to mail them a signed copy soon, when I get my order. I wish I could deliver it in person. We don’t know when we will be able to visit them and everyone else.

I get flashbacks from the LA Experience too. Or it enters my dreams. There is plenty of trauma to go around, from various memories of that time period. I am always heartened to remember, when I wake up, that it’s over.

But as for the current situation? I’m in a new routine. The kids’ school has ramped up its online learning. I’ve got the grocery delivery and disinfection down to an art and a science. I’ve finally tackled the disarray of the home office (which is shared, but not at the same time of day) and am slowly making it more workable.

It goes like this: I wake up, I hear the Say’s Phoebes chirping, and I start the kettle for tea. I forget about the kettle. Then I toast a bagel, and remember the kettle, and get the tea steeping. I start eating the bagel, and realize I forgot about my tea. (This part is not new, and is, in fact, an infamous habit of mine now for the past few years.) I get my tea and I scroll through my phone and I eat my bagel. And I remember my tea, and drink it, and it’s cold, so I microwave it. Only now the time delay between these activities is stretched.

One of the kids gets up, almost always my younger boy, and gets his breakfast going. The older boy (The Teen) gets up, fixes his breakfast, and then they both play on devices for a few minutes. Then they start their classes online. The younger boy is more diligent, the Teen needs more goading. I check in on them both frequently. It’s easy to do, because we are all together. Their dad closes the door to the office and has frequent phone meetings every day. My work typically does not involve phone calls, so whatever I have that I am working on can be done anywhere in the house. But as I’ve mentioned before, I work better when everyone else has gone to bed.

The other household routines center around food: the procuring of it, the storage, the prep, the eating…and this was rather bumpy in the first few weeks, during the panic. I figured it out. I celebrated when my flour orders arrived. Yesterday I cheered when my bean order shipped out. After many delays and waiting for availability, I narrowed down the grocery delivery to one reliable local source, and I get most of the produce from a farm box, which gets delivered once a week. I have cooked a great deal—and I was already cooking a LOT.

My friends up the lane have been exchanging goodies with me. One of us has extra of something, so we share. One friend’s nephew caught a huge albacore tuna, so he split the thing up among several households, including mine. I baked cookies, cupcakes, doled out extra citrus or rice, and received Meyer lemons, blueberry muffins, and milk when I needed it. We put these things on our porches or patios for pickup, texting each other when they’re ready. We might wave through the window. I’m just grateful for the connection, for food brings us together…even when we are apart.

There was a Zoom party a couple weeks ago with some folks in SoCal and in Mexico City. That was a delight, just to hear and see people playing guitars, singing, each of us with a beverage in hand. One day I baked a lemon meringue pie and a friend poured himself a coffee, and we had “pie and coffee” in reference to Twin Peaks on a Zoom call, on opposite sides of the coast. I’ve had an emailed interview, and been on a podcast call. I’ve done Twitter live Q&A sessions, social media posts of various kinds, and texted with friends and family. So the social aspect has been figured out.

Every day blends into the next.

I plan my book release, which will have no in-person context, and no book launch party. (And sadly, no book signing brownies for now! One day…) All the conventions and festivals are canceled for the year. So everything must be moved online. And some of this is now quite welcome, which I hinted at previously.

Somehow, during all this, I am supposed to be writing. But I am troubled by the crisis, and how friends and family either have COVID-19, or they know someone who does. I mourn their losses and hurt for anyone hurting. So it’s hard to write.

But maybe it’s easier to paint. Or at least to switch gears a bit. I just wanted to paint some little watercolor cards and mail them out to spread cheer. And give myself artistic commissioned (but free) challenges. I’m very rusty. I do enjoy the work, though. I find I sit too long when I paint, however.

It’s so different from writing. I’m always writing, even if I am not physically writing. I’m writing in my head, at all times. It’s not like that with painting and drawing: those things I must sit or stand for, for long periods of time, to get things finished. So that’s an adjustment. But still, it’s satisfying to finish one of the little paintings, to seal it up and send it on its way. It will take me a couple weeks to finish them all.

I know full well, every single day, how lucky I am that I can work from home, and that I can feed my family and keep the machine running, so to speak. I met the challenge with a skillset and life science background that helped me hit the ground running. Or at least, as much as it is possible to do in an uncertain time. Every night before bed, I count my blessings, and hold the world in my heart.

So this is all a new normal, for now, and subject to change. Yet it’s not really “normal” and so I say it’s approaching normal. It approaches normality, but never reaches it, hence, “asymptotic normality”. Whatever it is, I adapt.

Wishing you all good health and safety, and something approaching normal.