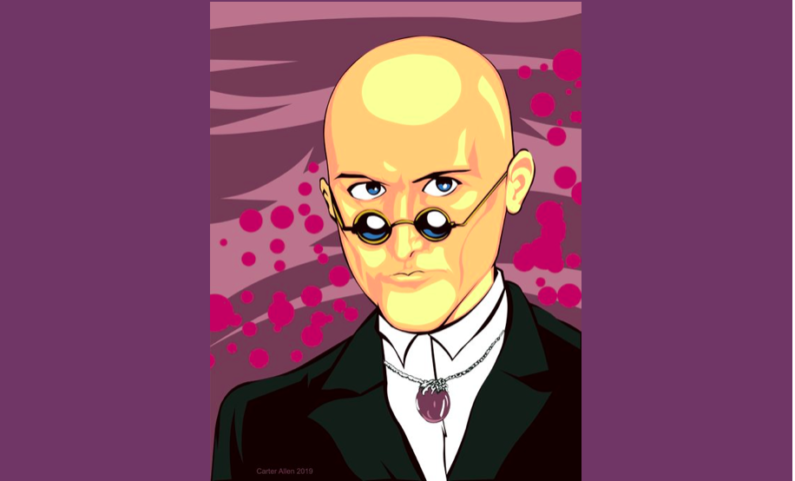 I am pleased to present Carter Allen’s latest work for my character Efron! You may remember he gorgeously illustrated Veronica.

In Heliopause: The Questrison Saga: Book One, Efron is one of the three most prominent characters. He is an unusual man. He has worked at Mandira Research Station for many years, but is close friends only with one crew member on the station: Meredith Brant, the 75-year-old matriarch whose daughter has been missing for two decades.

Efron strikes an imposing figure among the denizens of Mandira. He wears mostly black, and as one person puts it, he dresses like Nikola Tesla. He has a clean-shaven head, pool-blue eyes, and wraparound spectacles. He wears platform shoes that make him taller. While most of Mandira wears casual attire, Efron always stands out. Many of these aspects are affectations, rather than necessities, that make Efron unique.

One other remarkable feature of Efron is the violet stone he wears on a silver chain around his neck. He values this stone above all else in his home on Mandira. And its history is a curious one. Without spoiling, you will learn the origins of the stone in Book Two.

Efron strikes the main character Forster as eccentric and a little off-putting. He has a kind of wisdom his crewmates lack, and it informs his decisions when things aboard Mandira begin to spiral out of control. He is, despite his strangeness, a valuable asset to Mandira.

What I like about Carter’s depiction of Efron is that he has a sort of eagle-eyed stare, sort of unnerving and stern, but alert at all times. That’s very much Efron.

Yet when Efron looks at his stone in a quiet moment, Forster discovers there is more to this “curious raven” of a man than he thought.

Thank you to Carter for perfectly capturing Efron.