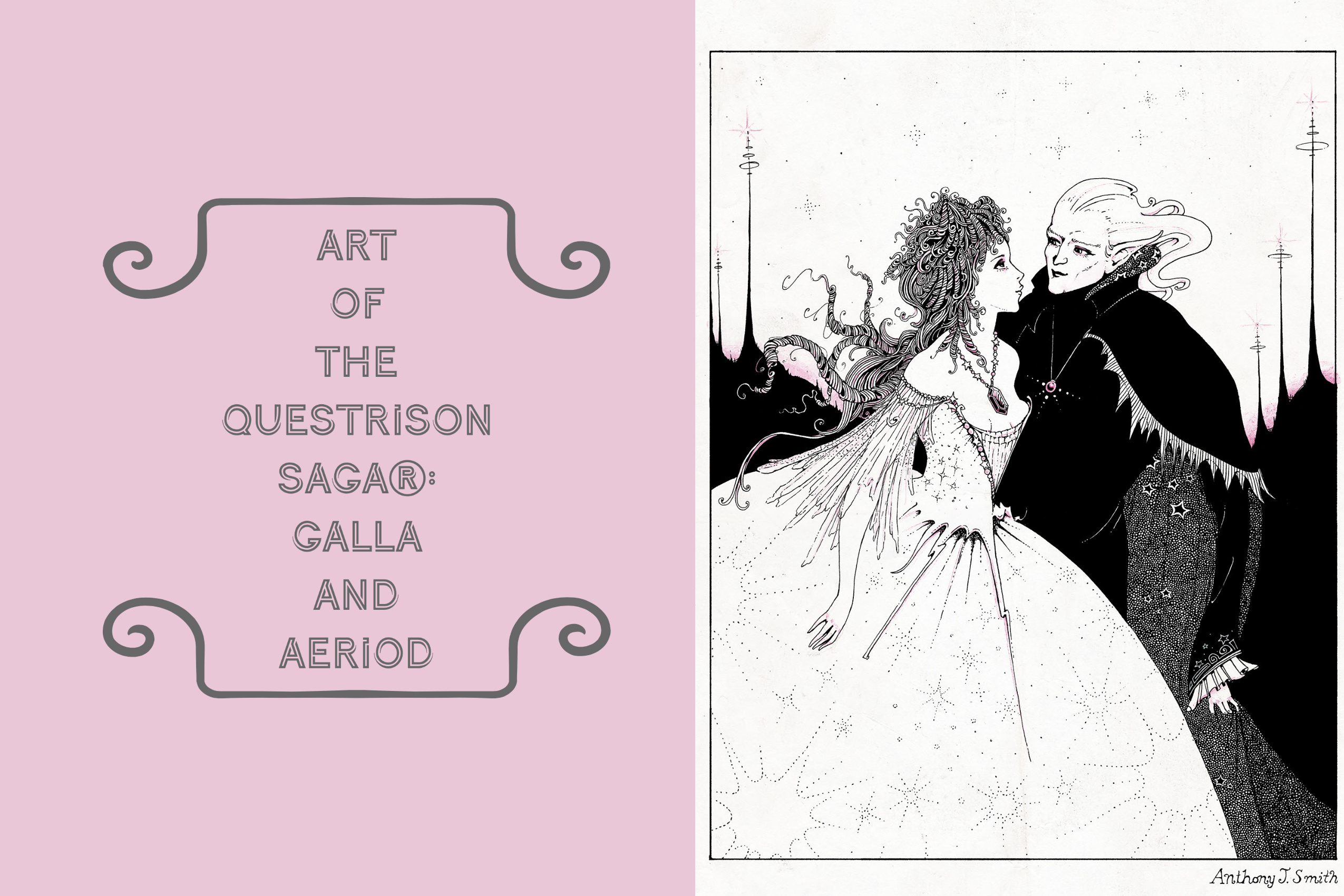 For this year’s Valentine’s Day blog post, I’m revisiting a couple I’ve talked about before (in fact, last Valentine’s Day): Galla-Deia and Aeriod. Theirs is a fraught story of slow-burn love, long separation, reuniting, betrayal, redemption, and navigating a new path. It’s a complicated love story for two complicated people. And without Aeriod’s love for Galla, he might never have intervened to help humanity in the fight against its greatest threat. So their story has far-reaching consequences.

I wanted to capture their early days, the sort of fairy tale romance that an ageless, human-looking woman and an ancient humanoid, galactic mage might have, on a world where that mage commands an asteroid to ferry his castle home above the planet Rikiloi. But in many ways, the story of Galla and Aeriod mirrors the myth of Persephone and Hades. I wanted art that could somehow show a bit of hesitancy on the part of Galla, finally (stubbornly) admitting her love, and the eagerness and thawing of chilly Aeriod, accepting that gift. This occurs during a ball, in a scene from Ephemeris: The Questrison Saga®: Book Two, and so I also wanted these two to look their most glamorous. No one could have captured this scene better than artist Anthony J. Smith, and so I commissioned him to make this gorgeous piece.

In this artwork, Mr. Smith gorgeously shows the starburst dress Galla wears, Aeriod’s signature black cape, and their two stones arrange toward each other in almost a heart shape. Galla’s hexagonal diamethyst matches the stone around Aeriod’s neck; that smaller, round stone features prominently in Heliopause: The Questrison Saga®: Book One. They were both part of Galla’s geode, that the android Oni-Odi found in space and brought onto his star-city of androids called Demetraan. Galla was born from this stone, and she alone can remove the diamethysts within it. The stones are incredibly powerful, protecting their wearers from the evil menace Paosh Tohon. They possess other powers as well, more of which are revealed in Accretion: The Questrison Saga®: Book Three. They also allow telepaths to focus their mental strength upon them to accomplish astonishing things.

I found Mr. Smith’s art on Instagram and instantly adored how each of his pieces beautifully tells a story, or evokes a mood. I knew he would understand what I wanted. He’s given me the most beautiful piece, beyond anything I could have dreamed of. And considering these characters have been with me over thirty years, and I’ve illustrated them myself, that’s no small feat. Honestly I have no idea how he did it. But it’s miraculous and wonderful. So I’m sharing it with all of you!

In Mr. Smith’s own words:

I’m Anthony Smith, an Illustrator who is obsessed with the artwork of the past, from the strange imagery of medieval manuscript illuminations to the elegant fairy tale artwork of Illustration’s Golden Age. Through my illustrations I intend to lead my viewers into a world full of delicate embellishments and strange imagination.