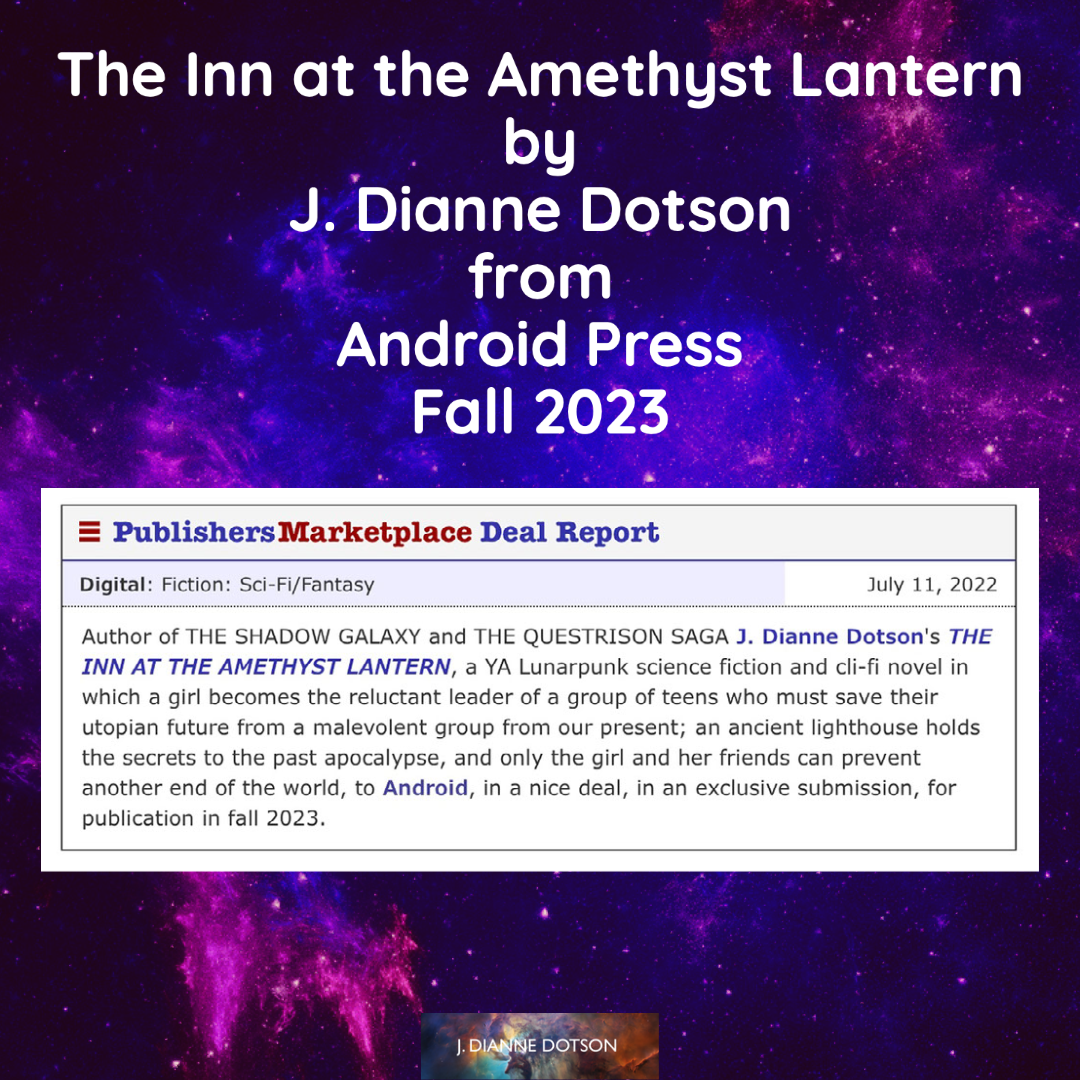 This year, I have two traditionally published books coming out: the collection called THE SHADOW GALAXY, which arrives March 3, and my young adult debut with the Lunarpunk SFF book titled THE INN AT THE AMETHYST LANTERN, arriving October 24 from Android Press. Yep, I have two 2023 debuts. Both very different.

First off, I am still bewildered that I got two book deals in one day in 2022. You can read about that wild experience HERE, in which I talk about my upcoming release, THE SHADOW GALAXY collection from Trepidatio Publishing. But this blog post is about THE INN AT THE AMETHYST LANTERN.

The Inn at the Amethyst Lantern

As mentioned above, the name of the new novel is The Inn at the Amethyst Lantern. It will publish on October 24, 2023, via Android Press. I’m going to call the book LANTERN for this blog’s purposes. LANTERN is a young adult (YA) science fiction and fantasy (SFF) full-length Lunarpunk novel, clocking in at over 84,000 words pre-revision. More on that shortly.

What’s the New Novel About?

THE INN AT THE AMETHYST LANTERN is a Lunarpunk novel set in the future. What is Lunarpunk? Lunarpunk is a sub-genre of SFF that deals with night-based aesthetics and future tech. You can read more about Lunarpunk HERE. LANTERN came about via a short story in Solarpunk Magazine titled “Midnight Serenade.” You can buy the issue with the story HERE.

In “Midnight Serenade,” Mira Celestus is a 14-year-old girl who is not “of age” in society, which is 15, and cannot go to the Glowworm Ball. But she might just find a way. And when she does, some unexpected things occur.

Enter THE INN AT THE AMETHYST LANTERN. When I wrote “Midnight Serenade,” I fleshed out the world-building of the land and the people who populated it. This happened very quickly, and a new novel burst forth in my mind. Feeling ambitious, because I loved it already, I pitched it to Android Press and they said YES. (See the book deal post linked above.)

Long after a climate catastrophe, a utopian future faces an unearthed evil from our present.

Gentian “Gen” Lightfoot and her friends live in a time after a climate catastrophe and dangerous sun resulted in a societal shift to night living. After Gen’s cousin Mira Celestus uses illicit magic to attend the Glowworm Ball, Gen receives an invitation to the derelict inn at the base of the Amethyst Lantern, a lighthouse old beyond memory. Soon after, an evil force connected to their past and our present seeks to disrupt their future utopia. Gen and her friends must stop the past from repeating itself by using all their wits and talents…and perhaps a bit of magic.

For the new novel, I wanted to tap into several very fun influences or homages. Some of these include Stranger Things, The Goonies, Sabrina, Nancy Drew, The Hardy Boys, and, yep, even John Carpenter’s The Thing and Star Trek II: The Wrath of Khan…among other influences.

One thing I love about Gen Lightworth, the main character of LANTERN, is that she really, REALLY does not want to be a leader or a hero. She just wants to have adventures. Gen did not plan on needing to save the world!

The cover reveal will happen likely alongside preorders, probably in June 2023. The esteemed Locus Magazine will debut the cover, for which I am thrilled.

I’ve seen the final cover art. It’s by someone whose art I adore. The art is GORGEOUS, and I cannot to share it! As the book description above implies, yes, there is a lighthouse on the cover, and that is all I will reveal.

The publisher and I already want there to be a book tour for THE INN AT THE AMETHYST LANTERN. The West Coast offers many opportunities. Interested bookshops should contact Android Press to coordinate any tours for any region.

You Are Cordially Invited

I truly cannot wait to invite you to THE INN AT THE AMETHYST LANTERN, a forgotten place full of timeless secrets, and to the futuristic Lunarpunk universe I’ve built.