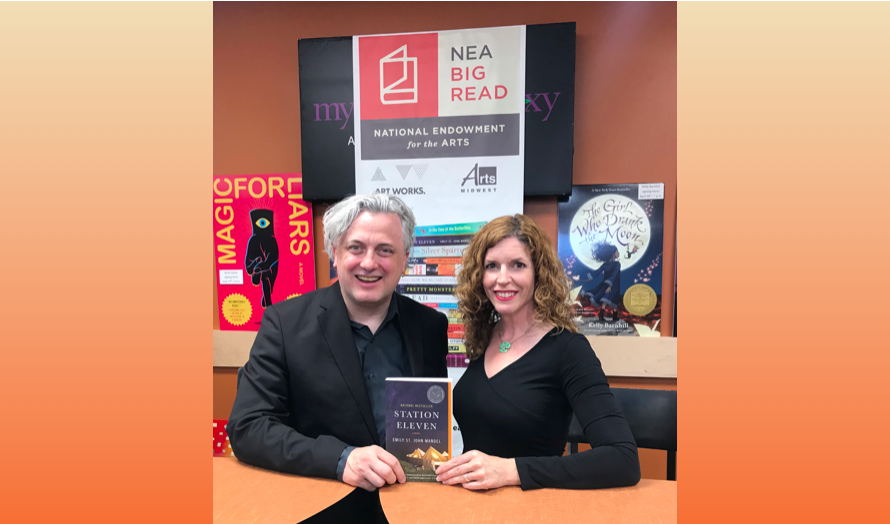 On April 20, fellow author Jim Pascoe (Cottons: The Secret of the Wind) and I participated in the National Endowment for the Arts (NEA) Big Read Apocalypse Panel, hosted by Mysterious Galaxy Bookstore in San Diego. Prior to our panel, we were treated to a delightful acting troupe, performing as the Traveling Symphony’s Shakespeare in Exile, portrayed in Station Eleven.

The NEA Big Read is an annual, nationwide event that encourages community reading of selected titles in literature. For the Apocalypse Panel, we explored the themes of two books: Fever 1793 by Laurie Halse Anderson and Station Eleven by Emily St. John Mandel.  The two books may not, at first glance, appear very similar in style. However, both showcase the effects of a deadly infectious disease on society as a whole and intimate character relationships in particular.

Fever 1793 is a middle grade historical fiction novel set in the 18thcentury, set during the true event of the yellow fever outbreak in Philadelphia. It follows the account of fictional teenager Mattie Cook from her first-person perspective as events unfold through the outbreak, and up until the point that it ends. This is a much slower-paced novel, making the reader feel as though we are reading Mattie’s plight as it happens. It is gritty, pulling no punches in the gore of the hemorrhagic symptoms, how quickly friends and neighbors and family die or disappear, and the constant gnawing question of survival.

Station Eleven is an adult novel beginning in the present day. It expands and contracts between past and future over a period of decades following a near-extinction event of humanity due to a fictionally mutated swine flu. The points of view in this novel vary between characters, and jump back and forth between the start of the outbreak, twenty years in the future, and to points before the outbreak began. The outbreak itself is incredibly rapid, essentially ending the entire world’s civilizations within a few days. By jumping forward two decades, readers see how this new landscape works, and how “survival is insufficient” such that a peripatetic band of stage actors and musicians forms a Traveling Symphony to keep survivors entertained, and themselves sane.

It’s interesting comparing and contrasting the two, and threading the needle of the apocalypse theme. On one hand, Fever 1793 recounted a true event, and so we know how the story ends. It obviously does not end in an apocalypse; but for those who lived through it, it surely must have seemed that it might. There was no electricity, no Internet, no way to communicate efficiently, and so once the outbreak really took hold, nobody knew exactly when it would end. There was a question of its ending at all, but there was the optimism that the arrival of frosts would stop it. This is because mosquitos spread yellow fever, and cold frosts would kill them.

Station Eleven, however, is pre-during-post apocalyptic. We never know why civilization ends so abruptly, aside from the extraordinary pace of viral incubation and transmission. Characters that lived before this pandemic recall a very different world from those who arrive after it, or are too young to remember the old life. The thought of an airplane flying, or the use of cell phones or the Internet, or even electricity mystifies these younger generations.  The juxtaposition of the before and after is poignant. The future is uncertain.

Jim Pascoe and I talked about various aspects of all of this. We agreed there is so much that we, as citizens of an affluent country in 2019, take for granted: running water, electricity, smartphones, being able to go to the grocery store, ordering takeout. We talked about how plausible Station Eleven might or might not be. And we definitely agreed that an end to civilization as we know it probably would, as in Station Eleven, end up creating these islands of survivors who come together to form new communities, and how vulnerable they would be. We discussed the lack of empathy for both books whenever people would turn away anyone trying to enter their community, out of justified suspicion of strangers. There was a sadness to this, but survival remained the key goal in both books, and that created a dystopian fear.