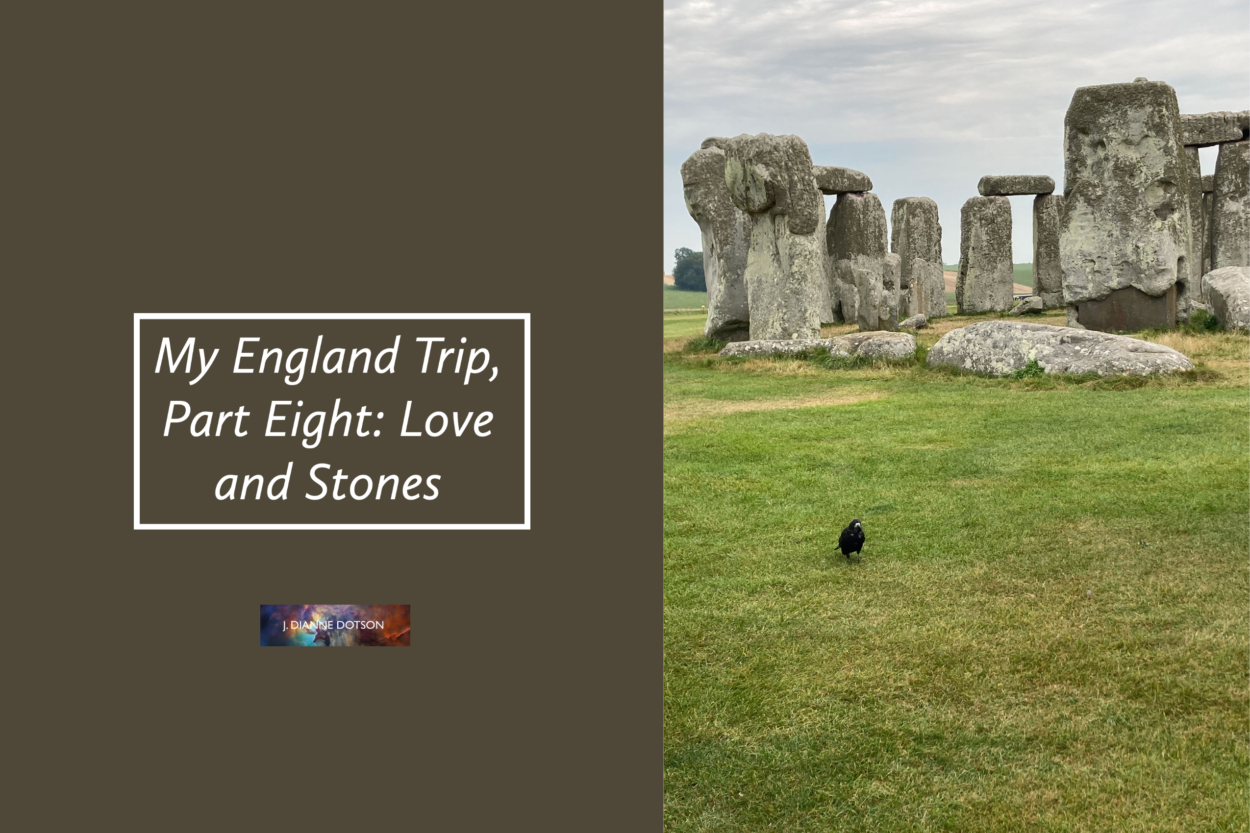 In ancient England, a number of stone circles were built. Most of them remain mysterious, as no one knows for sure what their purpose might have been. Among these, Stonehenge is the most famous. But aside from that, others are worth seeing. Gareth wanted me to see both Stonehenge and Avebury, a large, ancient stone circle that surrounds a little village. He drove us to Avebury first.

Avebury at first glance looks like an expanse of meadow, woods, and farmland, until you see immense stones perched on their ends in the soil. I had not known much about this remarkable place before my visit. The village within the stones contains a pub, some shops, and some exhibits for the site.

It was a glorious day to start with, though we feared we might encounter a storm later in the day when we headed to Stonehenge. Hints of upcoming autumn glowed among the late summer foliage.

We felt exhilarated here, and very much in love. We soaked up the wind and the sun, and I had scones again.

After Avebury, Gareth drove us on to Stonehenge. He had booked a special tour for late afternoon, when the main visitor center was closed. This tour allowed guests to venture right up to the stones, not allowed during normal visiting hours. At the visitor center, you can witness the actual size of the stones, and the proposed method for how they were dragged out to form the circle. Here we test our feats of strength!

A bus drove us out to the site, and I grew more and more excited to see this world-famous stone circle. Clouds gathered above us, and I hoped it would not rain.

Our guide was keen, with a dry sense of humor. She led us from the bus to the stones. There, some resident corvids greeted her, and they seemed to know just what to do to get a snack.

The stones are absolutely enormous. The scale of them is lost on you in photos, but up close you’re struck by their great size. Gareth and I were in awe and thrilled. We kept looking at each other, and felt completely in tune with our surroundings, and very much in love.

Then, before the lowering sky and within the center of the stone circle, Gareth got down on one knee. He looked up at me, and the light caught the ginger and cream of his beard, and his eyes glowed aqua, and he said to me, “Dianne, I love you so much. Will you marry me?”

In that moment my whole spirit flooded with amazement and extraordinary joy. I said “Yes!”

We kissed and hugged.

Dazed and joyful in the happiest moment of my life, we sort of stumbled around, and Gareth announced to the other visitors, “She said yes!” Everyone erupted in cheers. The guide offered to take our photo to mark the proposal.

We later just reclined on the earth and gazed up at the sky, in love among the stones. On our way back to our car, a rainbow appeared in the distance. The most beautiful future began to unfold, with two authors in love writing it in real time before the Universe.