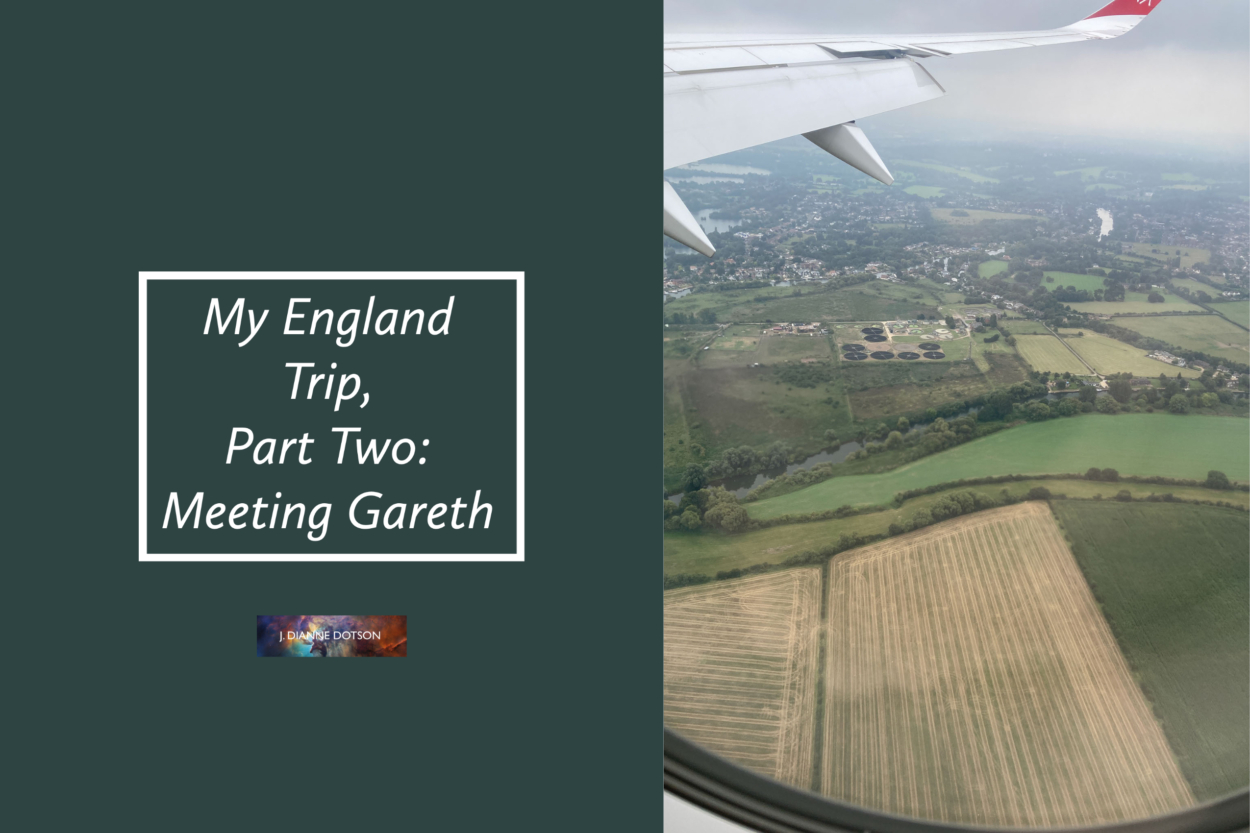 In my first post about traveling to England, I mentioned that a mutual friend happened to be at the LAX at the same time I was and that he also would be on my flight. He asked not to be named, and I honored that. But again, I’m so glad he was there and he kindly “talked me down from the rafters,” so to speak. (He told me in person weeks later that I at the time seemed to be holding things together well, and I assured him that I was, in fact, a nervous wreck, despite whatever I was projecting in that airport. Maybe I should learn to play poker.)

I teased in the prior post that something else amazing had happened with this mutual friend. He opened his messages from Gareth, a year almost to the day later, there in that airport, and said that he and Gareth had chatted at that time a year ago. Gareth was feeling down, and this mutual friend had assured Gareth that the right woman would come to him. So, this friend then took a pic of me right then and sent it to Gareth and typed, “I’ve got her.”

Once on the plane, our friend and I went our separate ways, and I was pleased to see that in my row of three seats, I got my reserved window seat, and an empty seat sat between me and a gentleman in the aisle seat. He was very nice, and quiet, and an ideal person to share a row with for ten hours. (And that of course meant that I had to get up multiple times during the flight for walking, bathroom, etc., but it was fine.)

Not really sure what to do with myself in my state of exhaustion and stress, and with the sundown and darkness below, I fidgeted. I went from reading Light Chaser which Gareth had mailed to me for this very purpose, to writing notes in a journal, to seeing what was on the movie and show selection on the seatback in front of me. And then the parade of treats began.

Honestly, I don’t think any other airline could have been more perfect than Virgin Atlantic. I swear to you, I’m not paid to say this, though if they would like… Anyway, if you ever want to live like a hobbit in the sky, this is your airline. They, over the course of that trip, brought snacks, a quite tasty meal for dinner, numerous drinks (including tea and my new obsession, orange crush, “a kind of cordial”), snacks, breakfast…about once an hour they rolled by. I don’t sleep on planes, not even in that tired state, but I dozed off and on just long enough to jerk myself awake when that treat trolley would trundle by.

At one point I opened the window blind and looked out, somewhere over northeastern Canada, and beheld true magic: the constellation Orion, brilliant as I had never seen it before, and it looked so close that I could almost reach out and touch it. My favorite constellation in the clearest view. It made me so happy.

Later, I dared open the blind again and could see the curvature of the Earth, and a faint smudge of light on the horizon. At that point, I think I was over Greenland but could not see it. I grew excited. Content, full, hydrated, and sleepy, I settled in and began to watch The Maltese Falcon. I would nod off, jerk awake, watch some more, eat, or drink some more, nod off, jerk awake, etc. I followed the flight on the interactive map on the screen before me. The moment we had crossed the Atlantic and approached Ireland, I felt energized. I stared out at the Atlantic, at the cloud decks, and the peeks of verdant land. I was getting closer.

The descent finally began, and I snapped photos quickly, eagerly. The lack of sleep didn’t matter anymore. The weather was fairly good coming into London, and I gazed eagerly down at the lush green below and being a born Tennessean, I thought, It looks just like East Tennessee, but there’s castles! And I saw a quite immense one as the plane approached Heathrow Airport. Turns out it was Windsor Castle (not shown).

The plane landed, and I turned my phone back on. I saw my friend as we disembarked. He waited for me and directed me where to go for security checks. I messaged Gareth, who had been keeping track of the flight, and he was there with his son parking. I got through security and meant to wait with my friend in baggage claim, but the friend stared straight into my eyes and said, “Go!” So I bolted.

Bleary-eyed, wildly excited, nervous, heart pounding, I stomped in tall boots under a long dress through that airport toward the barrier where Gareth was waiting. I looked this way and that, and by and by saw someone tall in the distance, standing next to someone shorter. Finally, I exhaled.

I knew immediately that was Gareth and his son, despite the distance, despite the masks. He walked toward me quickly, and I took my bags and threw them aside, and we hugged. Oh, we hugged. A hug heard ’round the world.

Gareth said then, “Thank you. Thank you for coming.” And my eyes stung with unshed but happy tears. And in that moment, my entire life shifted, and I stepped into a new reality.

Today, Gareth told me: “My heart melted the moment you threw aside your luggage and ran into my arms.”

Mine did as well.

On the way to the car, we kept staring at each other. Then he put my bags in the “boot,” which I quickly learned is what we call the trunk of the car in the U.S. And we took our masks off, and we kissed for the first time.

I had known Gareth for over three years. We had messaged. We had made Zoom calls. And we had sent each other mail. And we are, after all, writers of extraordinary fictional circumstances, so we have good imaginations. But never in all my life had I imagined something as incredible as this.

All the worry about whether we would get along well in person, whether we would have chemistry: it all was tossed aside just like my luggage when I first laid eyes on Gareth. There was no worry.

Gareth was better than I ever could have imagined. And I was there with him at last. And we, already, immediately, powerfully knew it was the real thing. Love.