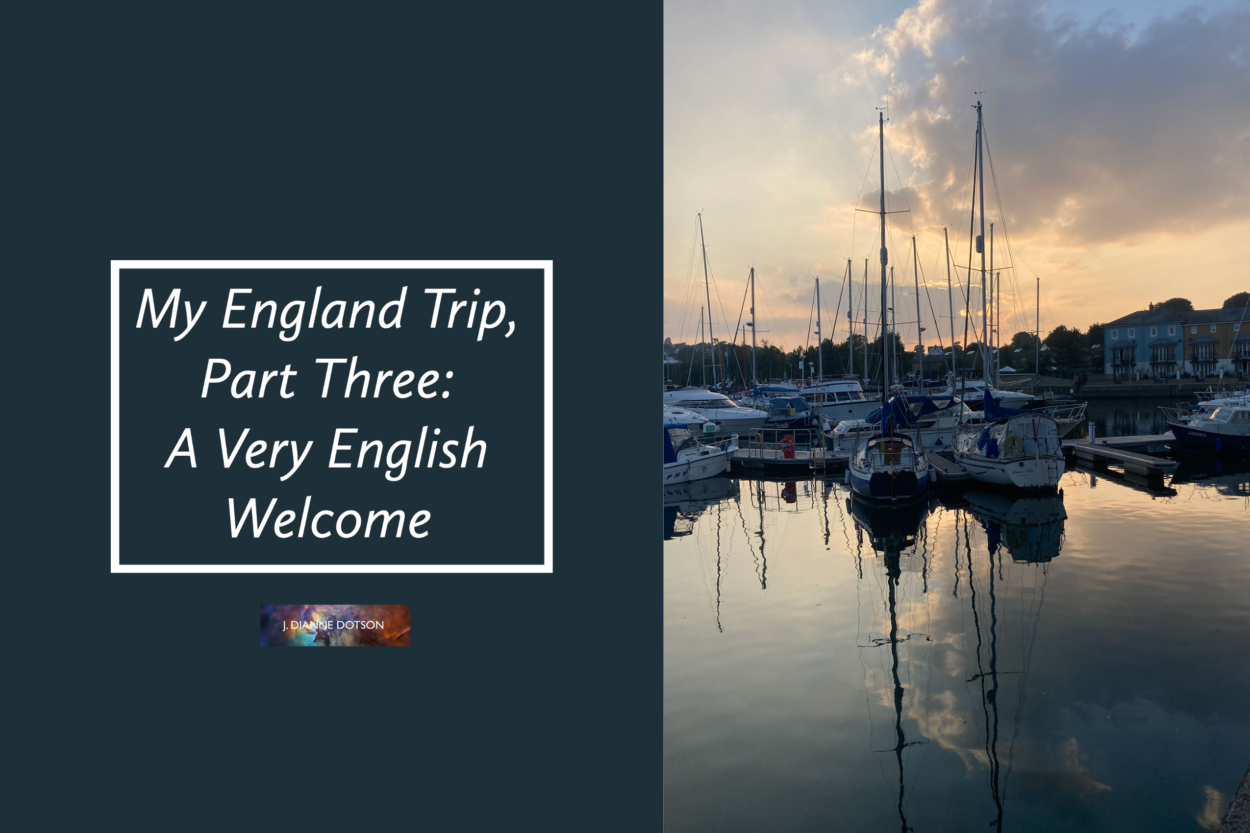 After buying the tickets, landing in England, and meeting Gareth, he drove me back to his home in Bristol. Other than continually looking over at him (to both make sure that yes, he was real and because I was besotted), I don’t remember much of the drive…probably because I was exhausted from lack of sleep and a ten-hour flight.

Portishead and a Pub

We took his son to their home, and after that, I checked into a hotel across from a marina in the town of Portishead. Prior to my trip plans, I had only known the name of the band. I instantly enjoyed Portishead, which had both a coastal village vibe. It was peaceful, lovely, and a good place for me to make a base of operations for the week ahead. But I was starving by this time, so we made our way to a pub.

I had a proper pub meal at Hall & Woodhouse pub, and thought that I should probably go ahead and do things right and have a Very English Dinner in the form of fish and chips. And as you can see, there were several taps on hand, so Gareth ordered an Amstel, and I tried a small Badger Beers Fursty Ferret Amber Ale. Which I quite enjoyed, as the first beer I had had in seven months. The fish filet was enormous, the chips were tasty, and the mushy peas were just right.

After dinner, we strolled arm in arm and hand in hand around the marina, watching the light fade into the blue hour. Being a sailor’s daughter, I felt most at home around the boats. Stars shimmered above; the boats reflected on the dark water below. So closed my first partial day in England perfectly, my belly full and my heart happy.

Tea and a Walk

In the morning, I was so exhausted from the travel marathon that I only vaguely remember Gareth taking me from my hotel back to his home for tea. The rather rambunctious and large Labradoodle pup Leo needed a walk, so after tea, we took him out to explore the village.

The village resides in a lush area away from the bustle of downtown Bristol. There are many meandering paths for walking, some of them steep. We took the dog everywhere, and Gareth described everything we saw. Early autumn hints abounded: fat blackberries, a light blush on the leaves of vines, trees laden with apples, and loads of conkers in the chestnut trees had begun to drop. We walked among parks, alongside orchards, to a pond, and in the heart of the village itself.

Because Gareth and I have shared peeks into the places we live over time, everything around us seemed familiar to me. At the same time, it was brand new. And with every step, I knew that I felt very much at home here, both in the land itself, and with Gareth especially.

We meandered hither and yon, and the dog was happy, and so were we.

Coming soon in part four, our visit on the same day to Wales, and Chepstow Castle!