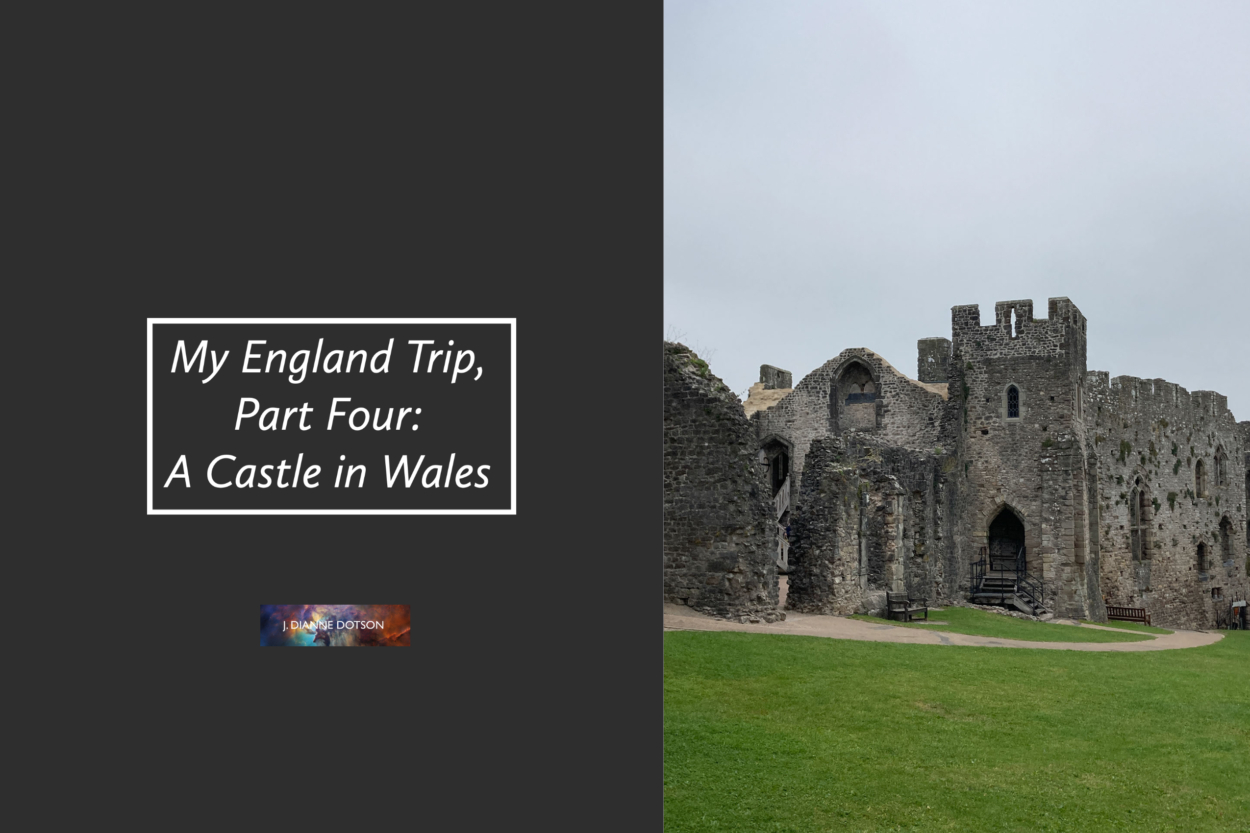 In the weeks leading up to my visit to the UK, Gareth asked what I wanted to see, and I mentioned that my younger son was keen on seeing castles. I had even entertained the idea of Face Timing with my boys FROM a castle. But due to the eight-hour time distance between Pasadena and the UK, and the fact we planned to see a Welsh castle in the morning, that didn’t work out. My son was not disappointed, however, because I had plenty of pictures and a book to give him upon my return.

Wales in the Blood

Wales is part of Gareth’s ancestry. And due to a remnant of some old memory, I suspected it was part of mine. After asking an aunt of mine who has researched the genealogy of my mother’s side of the family, I confirmed this. Gareth took me back to our mutual ancestral homeland, to Chepstow Castle, located in Chepstow, Wales.

First, I must tell you my reaction to entering Wales. It is much the same as entering another state if you live in the US. There is, however, an immediate difference in signage, as half of a sign is in English, and half is in Welsh. This was not the only difference, and I could not quite put my finger on why. Just know that you are, in fact, in another country. When I try to explain this to some of my friends and family here who have not visited the UK, I have to explain just what the United Kingdom is, versus Great Britain, versus England. And then I can feel a tiny headache coming on. Which I’m going to have to get over, for various and sundry reasons, but I digress…

The town of Chepstow is quite darling, and I nearly got whiplash looking back and forth at everything. Then, quite suddenly, I found myself looking up at a hill where there is a freaking castle just sitting there. Who let that thing out? I staggered in my jet-lagged state out into the cool Welsh air and stared up at it, and then quickly picked up my pace to approach the castle, my smile and my joy growing by the second.

Chepstow Castle is now a shell of what it once was, but that is because it truly is ancient, and has been through many interesting times. It was built in 1067, by a friend of William the Conqueror named Earl William fitz Osbern. It was an early Norman stronghold in Wales. You can learn more about the castle HERE.

This castle is an explorer and a history buff’s dream. Throughout the castle, there are many nooks, crannies, and rooms both little and large to explore. A door of great age stands still largely intact.

Helpful castle models near the entrance gave a sense of the structure’s evolution over the ages.

As you can see, the castle perches on a sheer cliff that drops into the river below. In fact, we found an original toilet used long ago, and if you looked down through the seats/holes, you’d be staring at the river. No pranks allowed here, folks.

At one point, I sat up against the stone wall and looked out, and Gareth captured a picture of me. I sent it to my siblings, and my eldest brother said, “You look at home.” And he was right, for I felt some deep current of belonging there.

Thanks, we’ll take it!

We ventured along the remnants of the castle wall, and I was recording a story and promptly stumbled. I thought briefly, “Well, how very American, to eat it on a castle wall in Wales.” The blooper reel will cost millions of dollars. (I was fine, except for my ego.)

Scones and Tea and Belonging

After the castle adventure, I was quite ready for tea. So, we stopped for that, and I got some scones…and thus began the great scone wars of which to put on first, cream or jam, and in this shot, you can see my first choice. Later during my week in the UK, I chose differently.

My first venture into Wales felt like I was returning to my roots. In fact, this is how I felt both with Gareth and with Wales.

I look forward to seeing more of the country, and currently, I’m learning Welsh on Duolingo and enjoying that immensely.

Stay tuned for the next post, in which we explore Bristol, the city of Gareth’s birth. Catch up on parts one, two, and three of this adventure meanwhile.