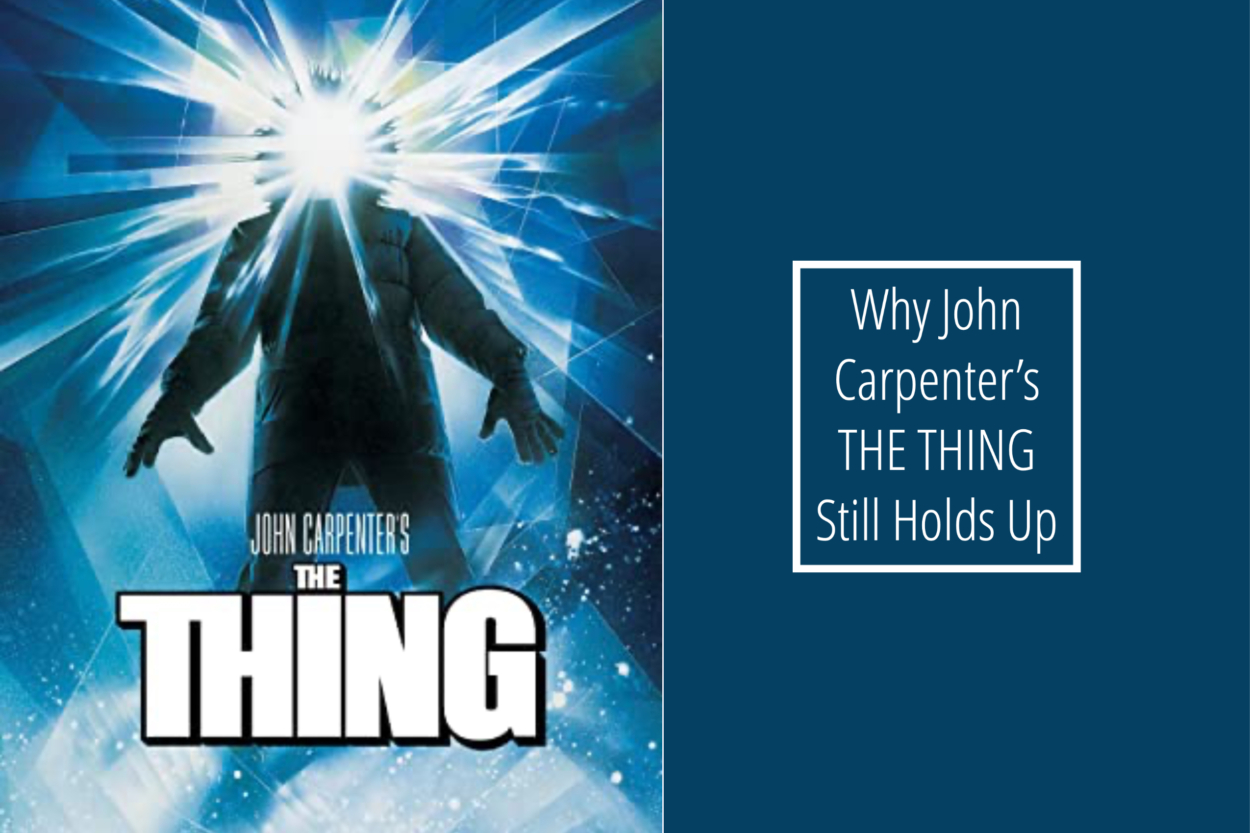 This weekend, I watched the 1951 movie, THE THING FROM ANOTHER WORLD. This was the first adaptation of John W. Campbell’s book WHO GOES THERE? And while I enjoyed the classic sci-fi movie aspect, the Cold War element, and the truly fabulous outfits from that era, it really didn’t grab me the way John Carpenter’s THE THING did and still does.

So, what’s so special about John Carpenter’s THE THING? Let me first frame for you my first experience watching it and how that shaped me forever in my writing and my taste in movies.

Back in the mid-1980s, I lived in a house under constant construction. Long (very long, in fact) story short, the entire main level and loft were unfinished for several years, so my family and I lived in a finished basement with paneled walls and a concrete floor covered by a dark, spaghetti-and-meatball colored carpet. The basement stayed uniformly cool throughout the year, even in high summer…which in East Tennessee was quite syrupy and hot.

During this period of my life, my pre-teen years, my family first got cable television and the occasional free premium channel. During one summer, I managed to slip into the basement living room while everyone was out, with all the lights off, and I watched THE THING.

I can’t have been more than ten years old. And let me tell you, that kind of situation, combined with being dark, cold, and alone left its mark on me. To this day, THE THING is still among my top 3 films of all time and is the only movie that truly disturbed me on a deep level. Why, aside from the age and circumstances of my first viewing, is that?

Why Is THE THING so scary?

Let me break it down.

My growing writer brain picked up very quickly on the setting of a bleak, Antarctic landscape and the heartbeat and the low-toned soundtrack by Ennio Morricone. That drumbeat is classic John Carpenter. You know something is going to go down when you hear that. The shock of a helicopter chasing a dog and someone in that helicopter shooting at it really threw me for a loop.

As I kept watching, I could quickly see that something had to be strange about the dog. Mind you, I had no idea about the plot, and at that point, had not seen THE THING FROM ANOTHER WORLD until years later. I had, however, surreptitiously and inappropriately read CUJO by Stephen King at that tender age. AND there happened to be a ferocious German Shepherd on the next block over in my semirural Tennessee neighborhood. A dog that hated the sight of my bicycle, which I had to pedal very quickly to get past the beast, as it liked to snick its fangs close to my ankles. I had to bike that way because it was the shortest route to my friends’ homes. But I can tell you that quite often, the long way seemed safer…

So perhaps I was predisposed to thinking something was up with the dog, despite its being a Siberian Husky and not a German Shepherd. (I swear to you, I love dogs. But being chased on a bike by one? It leaves one cautious.)

Upon introducing the men at the American Antarctic research station by way of the helicopter shooter, a Norwegian yells at and chases the dog, chaos erupts, and the man destroys the helicopter and its pilot. Then the Norwegian is killed by Garry (Donald Moffat) from a window inside the base. The dog, now safe, is welcomed into the base and put in a kennel with other Huskies by Clark (Richard Masur).

After the bedlam settled, the men at the American station can’t figure out what had gone wrong with the Norwegian man. The radios are down, and Windows (Thomas G. Waites) can’t get through to anyone in the outside world. So, R.J. MacReady (Kurt Russell) decides to fly his own helicopter with Dr. Cooper (Richard Dysart) to the Norwegian outpost to glean what they can. They find a destroyed base with a horrific-looking set of strange remains out in the snow, and inside the base, a lot of frozen blood, a dead man, and a large block of ice that appears emptied of something. The remains outside contain two faces. The men take this frozen set of remains back to their base, and things quickly go downhill.

So, the setup is uncertainty, chaos, mystery, and a monster in their midst as the new dog morphs into a horrific creature and attacks the other dogs, transforming them also. The crew, upon burning the beast, heads out toward the Norwegian base again and finds an enormous spaceship submerged in the ancient ice, which the Norwegian camp had blown up with Thermite. They also find a hole several meters away, signifying the block of ice the Norwegian researchers had retrieved. MacReady surmises that someTHING was thrown out of the ship, or crawled out, and froze for the time being. An autopsy revealed that the remains contained normal human tissue undergoing metamorphosis.

Knowing then that the creature is extraterrestrial and can assimilate other life forms AND imitate them, AND having been cut off from outside communications at the beginning of winter at the South Pole? That’s about as bleak a scenario imaginable. The Thing begins hunting the rest of the crew members and hiding in plain sight, creating suspicion among the team. Blair (Wilford Brimley), the biologist, realized that the creature could escape the station and head to a populated area, where it would replicate exponentially and take over the Earth. Pretty dire.

And that’s also why it’s scary: there’s a plausibility to it all. It seems very topical right now, but it also serves as a cautionary tale. As we make our way into the Universe, we may not like what we find. Perhaps some forms of life exist out on exoplanets that would not have our interests in mind whatsoever. Good thing those worlds are far away…

This also underlines the fact that THE THING qualifies as Cosmic Horror. Head to my post on Medium about Cosmic Horror as a genre and some examples.

One thing (get it!?) that makes THE THING so timeless is the outstanding job by the actors in the film. MacReady, played with gruff determination by Kurt Russell, headlines the film. He’s highly cynical and world-weary but not afraid to do what’s necessary despite objections from the rest of the crew. Keith David is excellent as Childs, another no-nonsense man who’s skeptical of the whole situation. Wilford Brimley inhabits the character, Blair, with folksy intelligence and shows his range when the character goes berserk. Really, the whole cast is excellent. There’s even a humorous scene of Palmer (David Clennon) mocking the astonishing Thing as a head-spider while he is a Thing himself. Great stuff.

The final, deeply haunting scene of the film works so well because of the strength of its actors.

It cannot be understated: practical effects work better in monster horror than CGI. We aren’t there yet with CGI. But in 1982, the remarkably gory and unsettling effects of THE THING garnered awards just as it nauseated and freaked out audiences. You believed it was real.

As gory as the Thing was as a creature, it was far more frightening for what it did to the crew on a psychological level. Feeding upon the paranoia of the team and even gaslighting them, the Thing created an instability that helped it succeed in its hunt. “Nobody trusts anybody now,” says MacReady into a recorder, “and we’re all very tired.” The creature proved to be most cunning in breaking down its prey on more than one front.

There’s also significant mystery lending to the staying power of John Carpenter’s masterpiece. Some plot points remain unsolved and still fascinating FORTY YEARS LATER. An example? We never really know when Blair is taken over and by whom. Was it one of the two escaped dogs, was it Garry, who was it? That’s always disturbed me.

Thematically it works, too, because Blair says something like, “You’re telling me the dog was walking around all that time,” and that horrified him. So, another dog being his undoing seems fitting. But we never see it, so we have to guess.

And I’m good with never knowing. We do not need to know. One of the best aspects of the movie is that some questions are never answered. That lends itself to the crawling unease that helps make it a masterpiece to this day.

Questioning one’s humanity is a recurring theme in science fiction. See also INVASION OF THE BODY SNATCHERS, THE STEPFORD WIVES, BLADE RUNNER. You can also read sci-fi author Peter Watts’ THE THINGS to get the perspective on the story from the Thing’s point of view. And if you’d like to learn more about Mr. Watts, see our interview.

J. Dianne Dotson is the author of the space opera series THE QUESTRISON SAGA and numerous short stories across several genres, including horror.