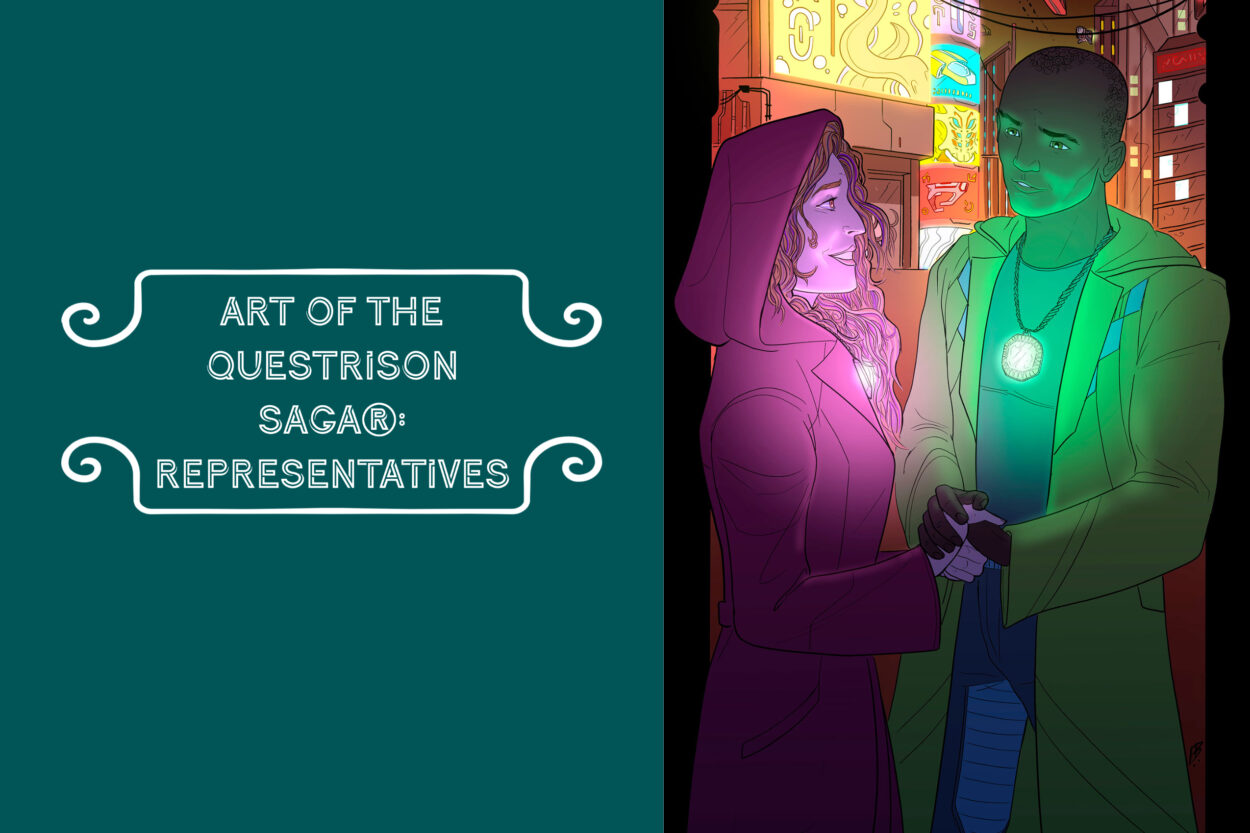 In Ephemeris: The Questrison Saga®: Book Two, impetuous Galla-Deia is chosen by the galactic governing body, the Associates, to be a Representative of humans. Galla’s android foster father, Oni-Odi, and the Associates assume this is her chief role, as Representatives look and act like the species they represent, except they are ageless. And while there are many Representatives of many species, Galla often felt alone in her role. Until she finds out she is not.

Kinship Among the Stars

In Accretion: The Questrison Saga®: Book Three, Galla and her crew venture forth seeking telepaths to help hem on their mission to stop the catastrophic natural disaster, the Event. The menacing being Paosh Tohon has taken advantage of the galaxy’s suffering, feeding off of it. Disrupted communications make for challenging times for Galla and the rest of the Questri heroes. On one of their missions, they stop at an infamous place: Yaddifor’s Delight. This system of vice asteroids is not the sort of place Galla would choose to visit, but her crew enjoys the shore leave potential during their covert mission.

Feeling unable to relax enough in her role as a commander, Galla instead wanders off to explore. In so doing, she notices someone who intrigues her. He later seeks her out, and the two meet. His name is Coniuratus. Galla recognizes immediately that he seems very similar to her. He even has a large crystal around his neck, similar to her diamethyst, except his is green.

Coniuratus reveals to Galla that she is not, in fact, the only Representative of humans. He is also, and there are a number of others out in the galaxy as well. Galla feels for the first time that she is not alone in her quests. She feels both stunned and greatly relieved. She also correctly guesses that Coniuratus is not this man’s true name. (In fact, it is Latin for “conspirator.”)

Galla wishes Coniuratus could tell her more, but duty calls them both on their separate ways. Coniuratus does tell Galla-Deia that he will look in on her from time to time, and to look for a sign in green, like his own stone.

Sometimes we can find friends in the unlikeliest places.

This beautiful art of Galla and Coniuratus was made by Elliot Balson. I gave him my own concept art for him to work from, as well as text from Accretion. I love the subtle imagery in the background on this asteroid (with a VERY particular kind of vice), and the kindness that shines from Coniuratus. Mr. Balson has also illustrated Trent Korba, Sumond, Galla and Jana inside a “haunted” Device, and additional works for promoting my upcoming Luminiferous: The Questrison Saga®: Book Four, which arrives June 1!