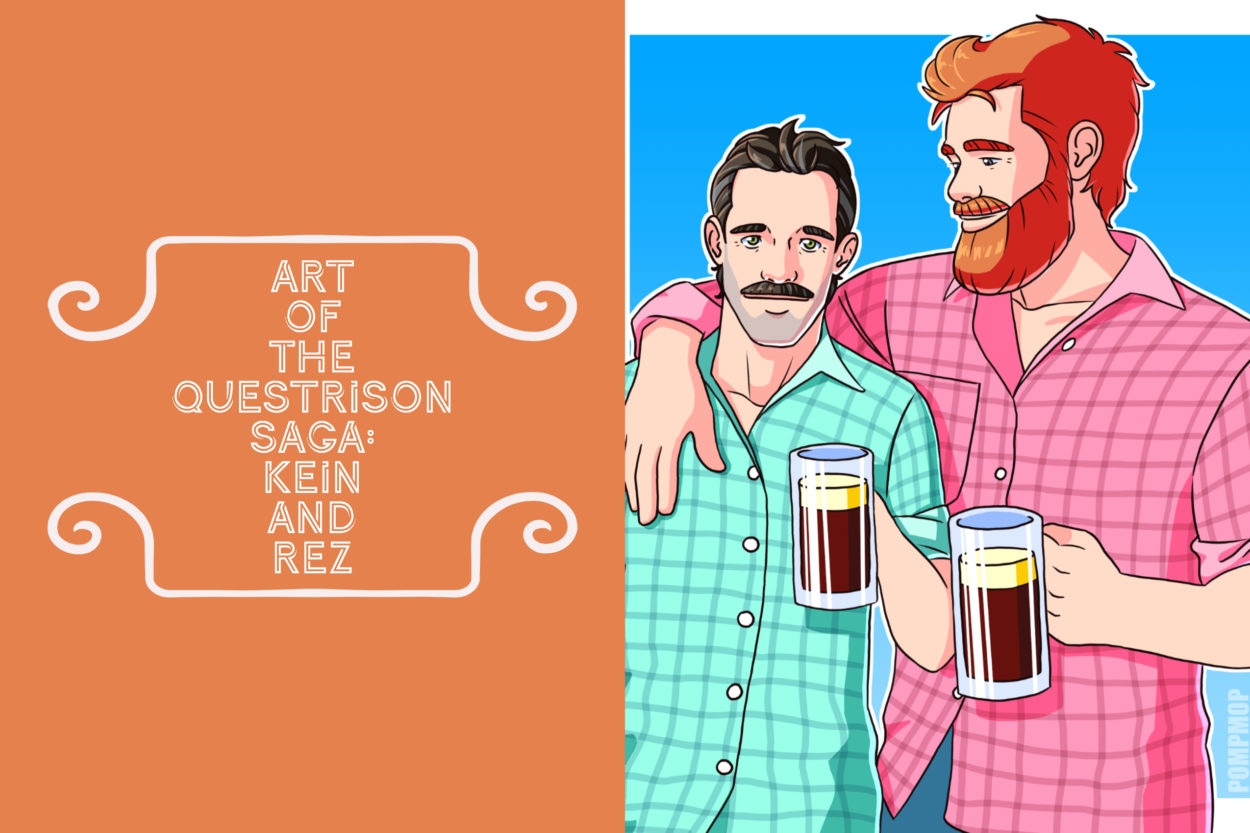 Kein and Rez are a gay, married couple who live on the planet Perpetua. They live a simple life among the small colony of humans on the world. Perpetua itself is a colder world than Earth, and often stormy. The part of Perpetua in which these two live is considered almost tropical for that planet, but on Earth, we would think it cold and rainy, much like winter in Cape Perpetua in Oregon. This is, of course, what the planet was named after.

Kein, with dark hair and hazel eyes, is the great-grandson of Linden Deming Forster (depicted here and here) and Auna Kein, two of the first group of humans that Aeriod helped to move to Perpetua after the events of Heliopause: The Questrison Saga: Book One. Forster and Auna were rather outdoorsy people, and they passed this love of nature to their descendants. Kein makes his own kayaks for the various waterways around his home, and for others who might want to buy one or make a trade.

Rez, who is taller, with a large ginger beard and red hair, makes his own musical instruments from wood and other materials on Perpetua. He is the primary brewer of the town the humans live in, and he is an excellent cook as well. Eventually Rez will take on a much different role in Book Three.

Kein prefers a rustic life. Although he can fly spaceships and visit a few other worlds, really he prefers to be at home, working. He and Rez live in a cabin on the edge of a forest, which contains a mysterious being that Kein avoids. Kein has begun having terrible headaches, much as Forster did at about the same age. Kein does not want to seek out the being in the forest, as he does not believe he is overly special.

But the lives of Kein and Rez change the moment the galactic governing body, the Associates, chooses Kein as the first human being Galla-Deia will meet in her training to become a Representative. Kein takes considerable risk leaving his world, because it is so far from Earth and Mandira that time dilation would mean Rez would have aged dramatically upon his return.

Fortunately, when Kein visits Aeriod’s world Rikiloi to retrieve Galla, the journey is not so far for him. But this makes Kein face a choice in the destiny laid before him. Will he aid in the fight against Paosh Tohon, or avoid the battle and remain on Perpetua for all his days in happiness with Rez?

Pompmop has wonderfully illustrated these two men in their rustic life. In this picture, as in the story, they invite Galla to try their homemade beer, to humorous results. You can read more about Kein and Rez in Ephemeris.

Pompmop is a gay, married digital artist active primarily on Instagram and also on Twitter. Thank you so much, Pompmop, for the vibrancy and joy you’ve brought to Kein and Rez!